The altcoin market seemed to be moving in tandem with Bitcoin for the most part. Following BTC’s inability to break out past $52,000, many altcoins were rejected from important levels of resistance. EOS was unable to hike past $4 over the past few days, while Crypto.com Coin retraced some of its gains after a strong bullish performance over the past month. Finally, Dash noted a bounce but was likely to be pushed lower once more. 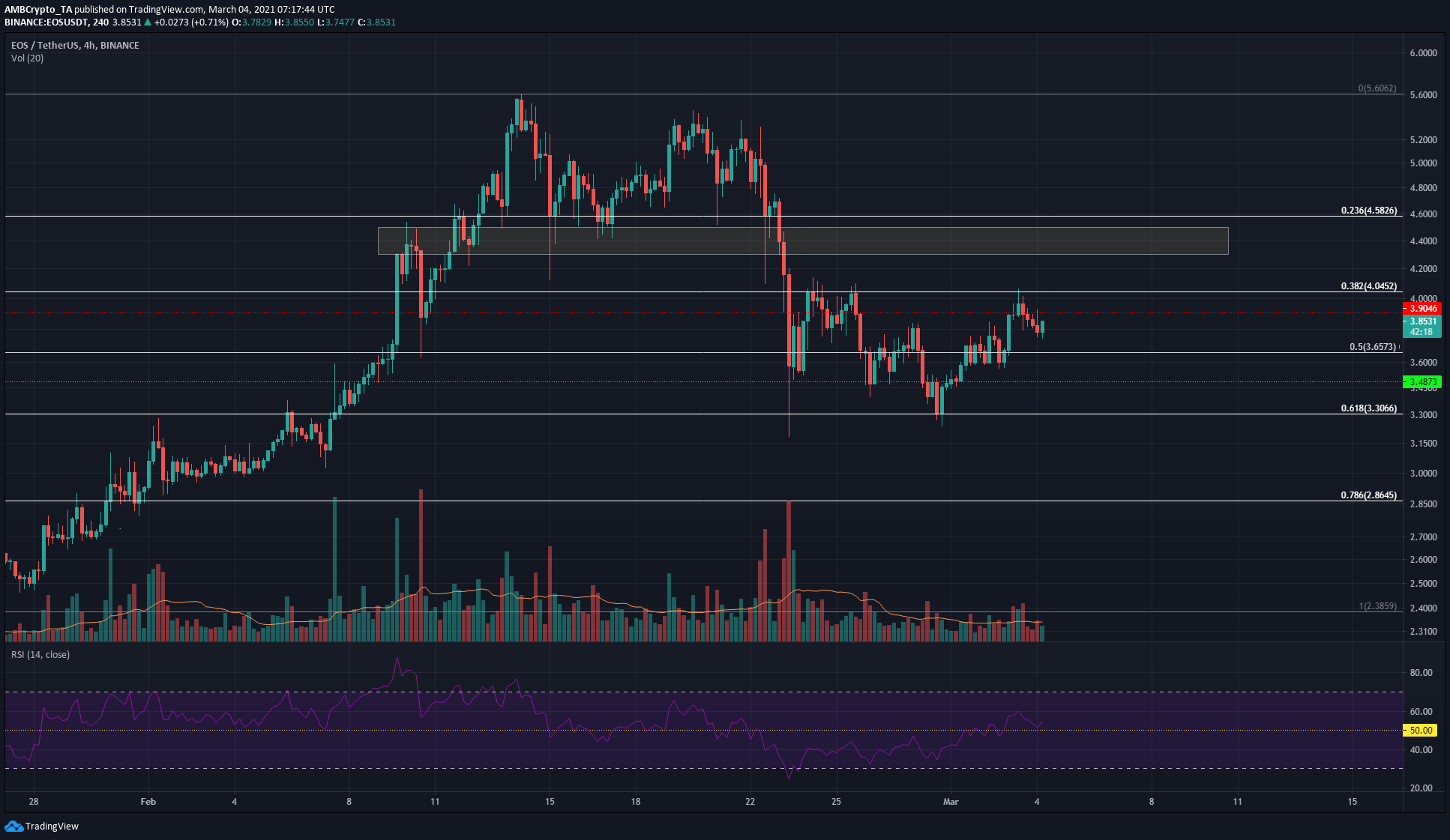 For EOS, although the 4-hour chart’s RSI rose above 50, there was still an obstinate level of resistance to face at the $4-mark. The recovery from $3.3 was swift, but this was only a partial recovery, and further headway needs to be made before bulls can be considered to be in the driving seat.

The past 24 hours saw EOS test the $4-level and be pushed back to $3.76. A close above $4 backed by good trading volume can be used as a signal to buy EOS around the $4-mark, with a stop-loss just at $3.9. The $4.4-zone has been a region of supply and can be used to close the long position for EOS. 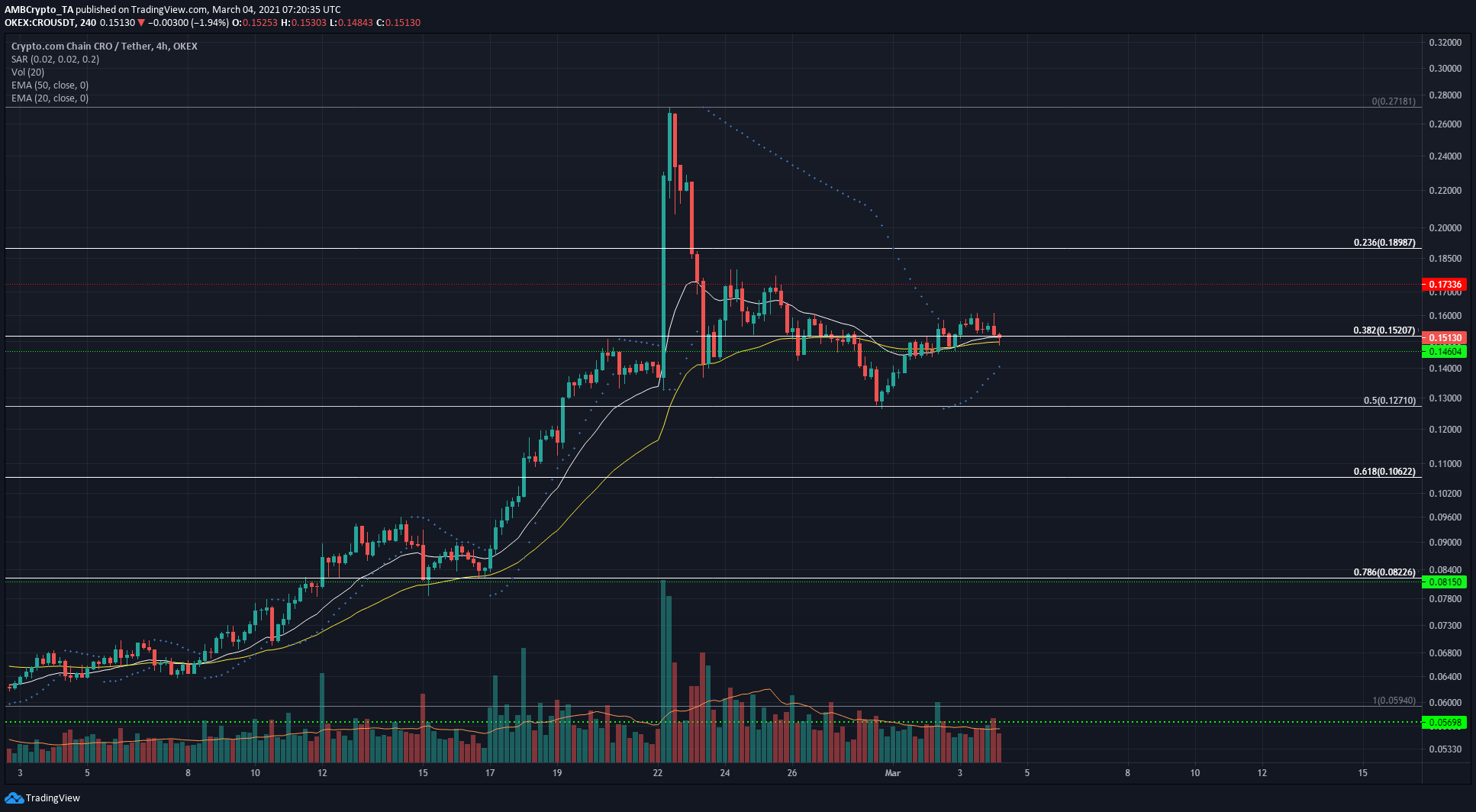 CRO has been on a remarkable run over the past few weeks. The breakout past $0.08 heralded an uptrend for CRO, and it reached a peak at $0.27 before it was forced to retrace some of its gains.

The Fibonacci retracement tool showed that CRO bounced after testing the 50% retracement level – A sign of bullish strength. Over the past few days, CRO climbed back above the $0.146-level of support.

The region from $0.13 to $0.15 can be used to accumulate CRO over the next few days. The defense of the 50% level was a bullish development. Climbing back above the $0.173-level would likely pave the way for another leg upwards.

The 20 and 50-period EMAs (white and yellow) registered a drop in momentum over the past few days, while the Parabolic SAR showed a buy signal and gave a more strict stop-loss level. 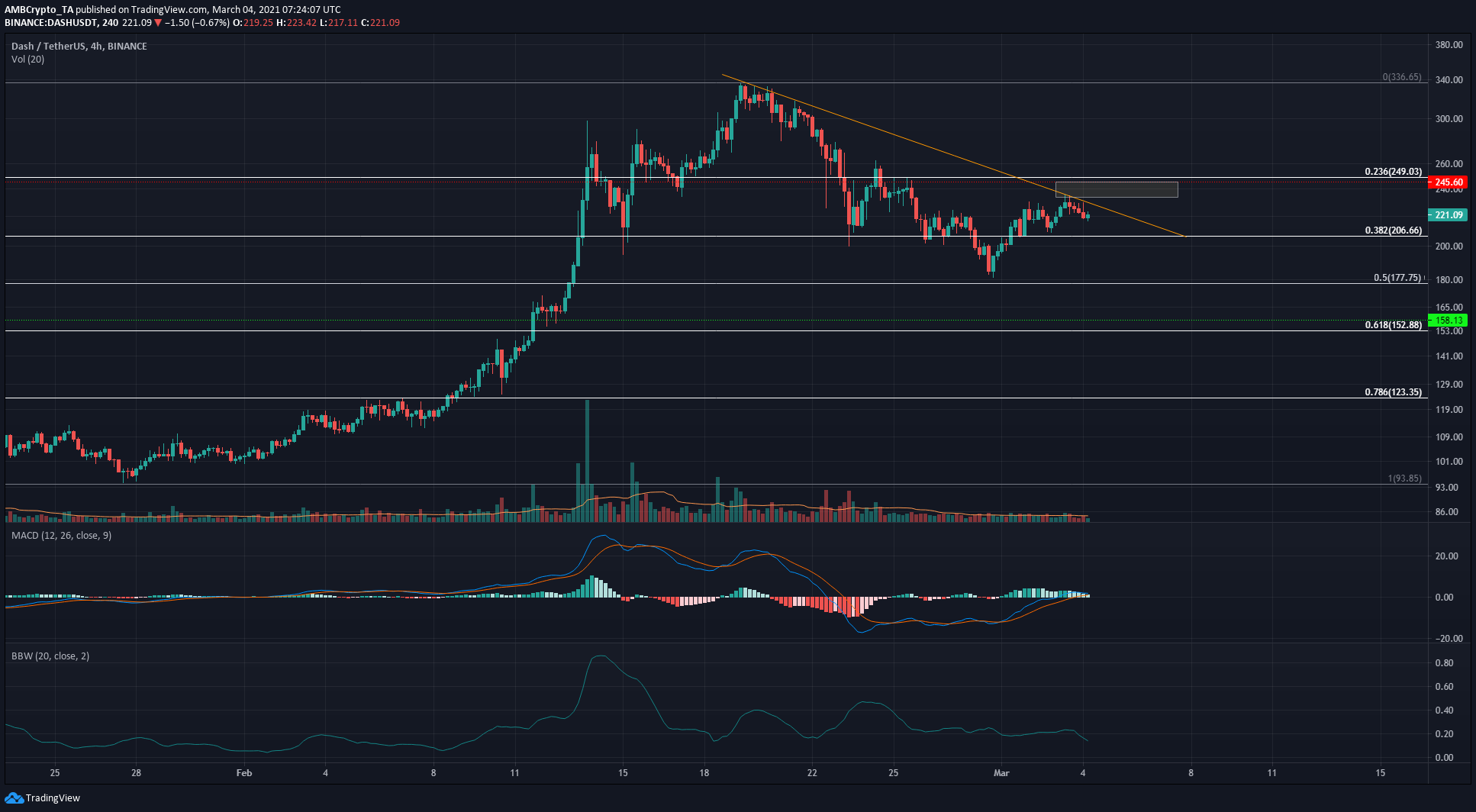 For DASH, the trend since mid-February has been downwards, with the crypto retracing the strong gains from prior weeks. Over the past few days, the Bollinger band width indicator dropped to show lowered volatility behind DASH’s price movement.

Above the descending trendline (orange), an area of supply for DASH from $235-$245 can be found. Even though the MACD formed a bullish crossover and rose above zero, the lack of trading volume on DASH’s bounce from $180 meant that further downside was likely.